★★★★ ‘important, absorbing and intelligent’  – The Stage

Trojan Horse was a story that hit the national press, accusing ‘hardline’ Muslim teachers and governors of plotting extremism in Birmingham schools. Adapted from the real-life testimonies, LUNG investigates what really happened. Trojan Horse is the story of a community torn apart by racial division, ‘British values’ and the culture of Prevent.

Mustafa most recently played Lewis in the Royal Shakespeare Company’s promo for Shakespeare’s King John. He attends First Act Workshops in Birmingham (the replacement group for the ITV workshop), both of which were attended by Lung’s Helen Monks. After graduating with a degree in Politics, Philosophy and Economics from the University of York, Mustafa decided to pursue acting, thanks to getting ‘the bug’ whilst playing Biff Loman in Arthur Miller’s Death of a Salesman. He has since attended the Street Voices playwriting course at Freedom Studios in Bradford, Tracey Street’s Foundation Acting course in Birmingham and the Old Vic Theatre Summer School. Trojan Horse will be Mustafa’s first UK tour.

Keshini trained at Rose Bruford College as an Actor Musician. She has recently appeared as: Rapunzel at Hoxton Hall, Kim in Eastern Angles’ production of The Ladykillers of Humber Doucy Lane as well as Singing Woman in Edna O’Brien’s The Country Girls at Chichester Festival Theatre. Cheshire Cat/Caterpillar/Carol Louise in Alice in Wonderland at Derby Theatre, Shahrazad in 1001 Nights for Transport Theatre, Princess Aouda in Around The World in 80 Days for NIE, Neighbour/Mum in Transport Theatre 1001 Nights UK Tour, The Monk, Cook, Arcita, Absolon and the Queen in The Canterbury Tales at Palace Theatre Watford, Sita in a UK tour of Sita’s Story for Tara Arts, Miranda in Tiny Tempest for Mini Mall Theatre, Genie in Moon and Genie for The Half Moon Theatre. Yellow Moon for The National Theatre of Scotland and Citizens Theatre Glasgow. She has also worked with Tamasha theatre company at The Unicorn, The Everyman Theatre in Cheltenham, as well as working for CBeebies, MTV and Paramount Comedy. 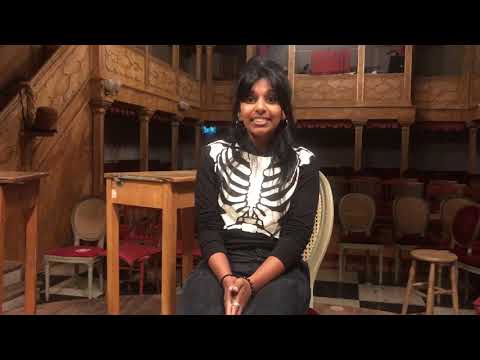